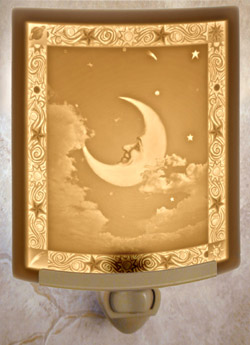 Marty Kubicki does all of the design work, original engravings, master mold work, and is personally involved in every aspect of The Porcelain Garden studio. Their first creations were functional household ceramics, with sculpted flower decorations; hence the name “The Porcelain Garden.” During the early 1980s, the artists started carving in translucent porcelain, and enjoyed the direction that their work was taking them. When they were introduced to Lithophanes by a collector, they had never seen such amazing work done in porcelain before! This wonderful art form had nearly disappeared, and only a few people were still familiar with it. There was a huge potential appeal that these beautiful artworks had, so the artists set out to reintroduce Lithophanes to the world. They originated the concept of Lithophanes as nightlights, at a time when few artists were making tasteful and artistic nightlights. Their long-term commitment to supplying the highest quality porcelain lighting possible has resulted in an enormously loyal following and notable respect in the American Handcrafts Community.